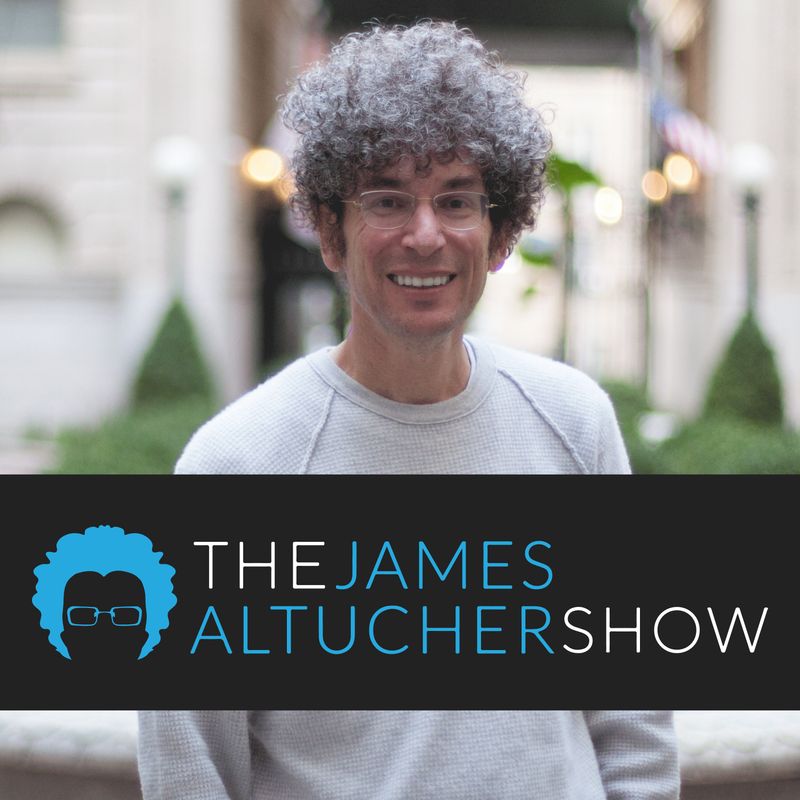 The James Altucher Show
Subscribe
James Altucher
Business, Comedy, Education, Careers, How To
RSS
Subscribe RSS
Ep. 216 - Yuval Noah Harari: A Brief History of The Future
"Money is probably the most successful story ever told, because it's the only story everybody believes."
Clip from 11:19 to 12:31
By: Mitch
Note: If a podcast uses dynamic ads, the clip start time may not stay accurate.

My ancestor from 70,000 years ago was smarter than me. He knew every plant, mushroom, animal, predator, prey in a several mile radius.

He knew how to make weapons. He knew how to capture something, make it edible. I can barely order delivery. And as far as weapons, they say “the pen is mightier than the sword” but I don’t think a tweet is.

My ancestor also knew how to adapt to new terrains, how to handle strangers who could be threats, how to learn who to trust and who not to trust. I wish I had his skills.

Not only that. Archaeological evidence says his brain was bigger than mine. And bigger is better.

To make things worse, another animal made the entire human race its slave. Wheat domesticated us. It forced us to stick around for the harvest, horde up for years when the harvest might be bad, go from a life of a diverse diet to basically all carbs all the time. And it turned us from hunters to farmers.

But it’s not all bad. And the news is actually very good. Probably the books I’ve recommended most in the past five years was “Sapiens” by Yuval Harari. And not only me: it’s Bill Gates and Mark Zuckerberg’s top recommendation.

And now Yuval has a new book, “Homo Deus” – i.e. where are humans heading? If Sapiens explored the last 70,000 years of human history, “Homo Deus” takes the trends into the future. What will happen next?

The answers are fascinating. And I had even more questions. I couldn’t believe I was finally talking to Yuval after reading “Sapiens” so many times and recommending it on every list and giving the book to all of my friends. And then finally reading “Homo Deus“.

What made humans the only animal to spread across the entire globe? What was special about us? How did we go hundreds of miles into empty water to find Australia for instance? I would never take that risk! And then survive and flourish in a completely new ecosystem, just like we did in North America.

“Fiction,” Yuval told me, and describes in his book. “We created elaborate fictions for ourselves: ‘nations’, ‘corporations’, ‘religion’, ‘crusades’, and perhaps the most successful fiction: ‘money’. So I could use a dollar and some stranger in China can use a dollar and we can trust each other enough to do a transaction.”

So what’s next? “Homo sapiens are going to evolve again.” Yuval said, “Technology is taking us there and technology is evolving much faster than we are.”

I still can’t believe I spoke to him. Five years ago I took his course on Coursera. I was thinking, “how did this guy get so smart?” And now I was talking to him.

And, like I said, the news was not bad.

Here’s what I learned:

1. The economy needs you to invest in yourself

“There’s a change in the nature of the economy from a material based economy to a knowledge-based economy. The main assets in the past were material like gold minds or wheat fields,” Yuval said. “These are the types of things you can conquer through violence.”

That’s how we got California. The US invaded and absorbed their wealth. But you can’t invade and absorb knowledge.

China isn’t going to take over Silicon Valley and absorb all the wealth. “Today, the main asset is knowledge,” he said.

Yuval said, “The source of wealth in California today is knowledge, in the mind’s of engineers and technicians and CEOs. And you just cannot conquer it by force.”

That’s one of the reason’s why Yuval says, “You see a decline in international violence.”

The other reason: weapons are too powerful.

“Nuclear weapons have transformed war between superpowers,” he said. War today is “collective suicide, which is why we don’t have such wars since 1945.”

Terrorism is different. Their weapon is fear. Yuval calls it “psychological menace.” But he’s really concerned about them in our future.

“In a way, a terrorist is like a fly that tries to destroy a china shop. The fly is so small and weak. It cannot move even a single teacup. So how does a fly destroy a china shop? The fly finds a bull, gets into the ear of the bull and starts buzzing. The bull becomes so enraged that it loses its temper and destroys the china shop. This is what happened in the middle east over the last 15 years,” Yuval said.

“Al-Qaeda could never destroy Iraq by itself. It got into the ear of the United States and the United States went wild and destroyed the middle eastern china shop for Al-Qaeda. This is how terrorism functions. And if you want to fight terrorism you should start with your own imagination.”

For me, this means understanding that ideas are currency. Becoming an idea machine, writing ten ideas a day, so you get the new ‘weapons’ of Sapiens, is the key.

In 500 years we might not be dealing with humans at all.

Look at Amazon for example. They tell us what to buy. We don’t ask our friends. We ask data.

“Given the advances of bioengineering, brain-computer interfaces and so forth, I think it’s very likely that within a century or two homo sapiens will disappear and be replaced by a completely different kind of being,” Yuval said.

He says bioengineering is just one possibility. Another is we start connecting brains and computers to create cyborgs.

I’m sort of scared and sort of excited. We went from tribes to villages to cities to kingdoms to empires to “isms” to…data that will unite us.

The next step in our evolution. The final frontier.